In honor of Women’s History Month, we’d like to recognize Mrs. Carolyn Bohnert and her history and contributions to not only Drury Southwest, Inc. but her community as well!  Merriam Webster defines hardworking as, “industrious and diligent.”  At Drury Southwest, we tend to just define it as Carolyn or “CB”, as she’s otherwise known.

Carolyn has been part of the Drury team for more than 47 years. She is responsible for the Company’s financing and treasury management, among many other family and company responsibilities. She began her career with Drury when there were just three hotels in the company portfolio.  She started work on a Wednesday as a part-time employee and by Saturday she was flying to Nashville, TN to view hotel sites.  Little did she know that her part-time job would become a 47 year career and she would see the Drury portfolio grow to over 150 hotels.  She has worked in every aspect of the company beginning with the construction side and she now shares in the day-to-day cash flow management responsibilities and the overall financial stewardship of the Company.  Carolyn serves on the Board of Directors, and is a Senior Vice-President of Drury Southwest, Inc. 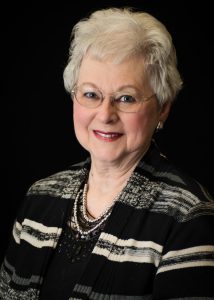 In addition to her many contributions at Drury Southwest she and her husband Bill have also raised three children, Jeff, Tammy and Lindsay and now have six grandchildren and one great-grandchild.  Being a member of the Notre Dame Foundation Board, she has been a tireless volunteer in Notre Dame Bingo fundraising since its inception in 1991, and received the Foundation Annunciation Award for her efforts. Carolyn was a founding member and treasurer of the Show-Me Blades Figure Skating Club for 10 years. As a member of St. Vincent De Paul Parish, she served as president of its Parish Council of Catholic Women for 3 years, and is also a member of the Friends of St. Francis, a support organization of St. Francis Medical Center.  In 2006, Carolyn was instrumental in establishing the Drury Southwest/Drury Hotel’s Relay for Life Team, which has worked their way up to raising around $30,000 a year for the American Cancer Society.

To quote Gertrude Stein, “Silent gratitude isn’t much use to anyone.”  So, in honor of International Women’s Day on Friday, March 8th, we’d like to say a special thanks to Mrs. Carolyn (“CB”) for all that she has contributed to the company and our team!  Your hard work and dedication is an inspiration to many team members.