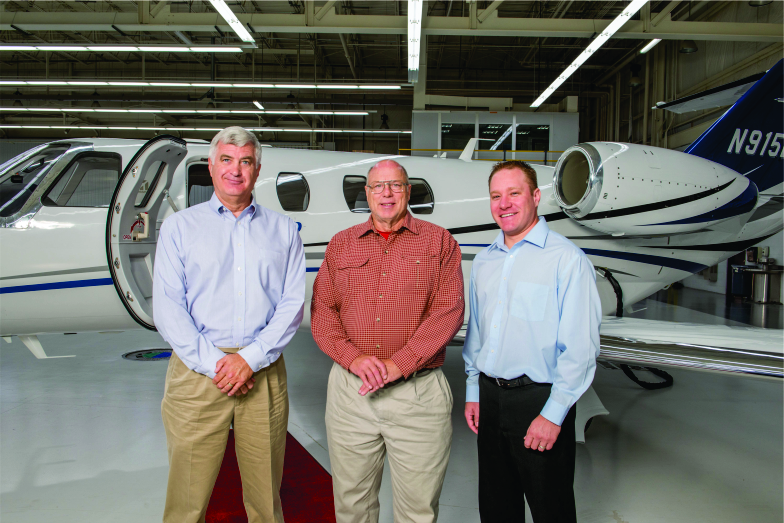 People listed in the Picture

Dennis Vollink, Willie Bahn, and Justin Davidson standing in front of the Cessna Citation M2, upon delivery in September 2015 at the Cessna aircraft acceptance hangar.

Bob Drury decided early on that it would be very beneficial for the Company to have an airplane to help with transportation to and from job sites, saving time and increasing efficiency. In 1981, Bob was put in contact with Dennis Vollink, who at the time was a T-38 instructor pilot at Randolph Air Force Base in San Antonio, TX. With Dennis being an Air Force Academy Graduate and pilot, he was looking to work for a growing corporation. After meeting Bob, coming to work for Drury Southwest seemed to be the perfect fit.

Since then, there have been other pilots and a few other planes, and the need has continued to increase. Dennis is currently Vice President of Flight Operations and still one of the current pilots, along with Willie Bahn, and Justin Davidson. Willie has been flying for Drury for a little over 20 years. He obtained his private pilot license in 1976, joined the Air Force in 1980, and finished his Air Force career with a short stint in the Army. He returned to Cape and began flying for Drury Southwest. Justin Davidson became the newest pilot in 2015, after being influenced by Dennis, a longtime and respected family friend. After graduating with a Bachelor of Science degree in Aeronautics, Justin instructed at SLU, and began to fly commercial with Delta Airlines for 8 years before coming to Drury Southwest.

These three professional pilots take care of the current two planes: a Cessna Citation M2 (8 passenger twin jet) and a Cirrus Vision Jet SF-50 (5 passenger single engine) . These planes are constantly being put to good use by getting our team to inspect new sites in which we have limited time to make decisions on, getting our team members to the construction sites on a regular basis, and getting our team members to City meetings during development. These planes are invaluable before the purchase of a project, during construction, and even after opening a hotel.

The pilots will continue to get plenty of flying hours in with all the planned company growth!